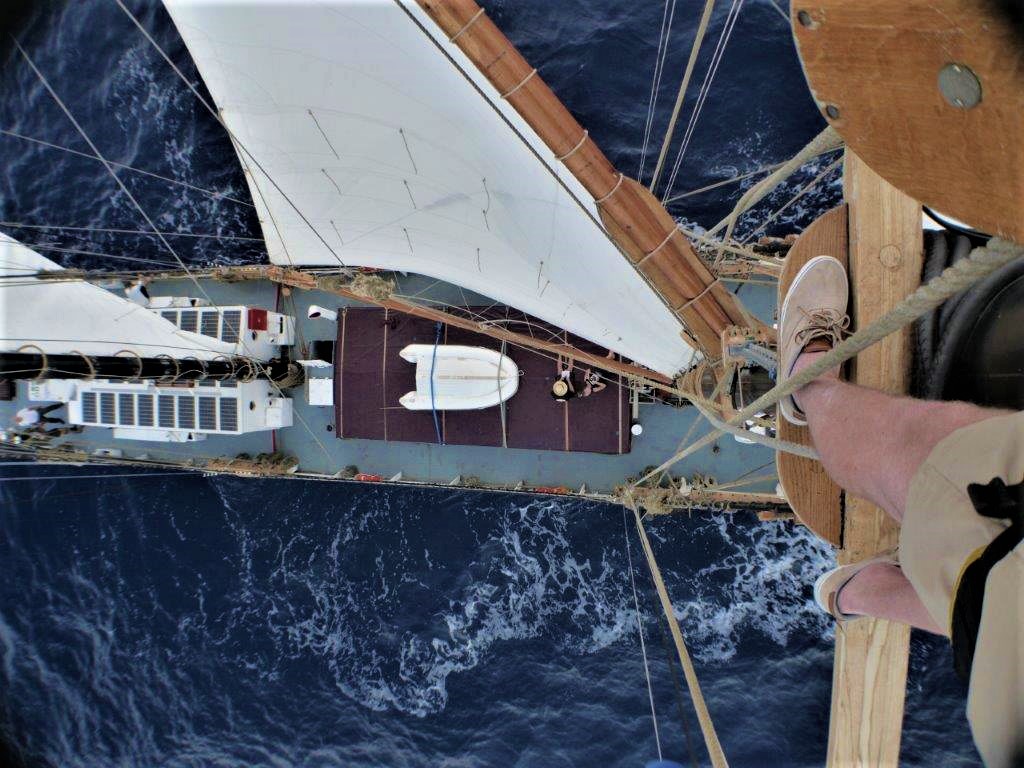 Captain Cornelius Bockermann’s reports from the past week aboard the AVONTUUR as she makes her way across the Atlantic Ocean, ETA Horta, Azores 22.03

Squally night with all hands to douse flying jib, schooner top and main sail at shortly after 0200h and an undesired wind an hour later when all was squared and shipshape again.

All is well on board!

Since yesterday the wind has increased and turned clockwise to S-SE’
l which has not allowed for much progress towards Horta. Nevertheless.

Since Puerto Cortes the entire crew has had more training setting, do using, trimming, reefing or repairing sails than any other crew before. Despite the unfortunate wind direction but with sails properly trimmed and an attentive helm we are making 5-8deg to windward.

Do I need to mention that all is well on board?

We’re sailing close hauled against an easterly wind and swell almost constantly above 7 knots and I hope that the wind will soon change to something more aft so we can shape a course to Horta instead of Ireland. There is a strong high just SW of the Azores moving NE with a ridge to the Bay of Biscay and if this is stationary and the wind continues like this for only a few more days we’ll leave the Azores 150 miles on our starboard and the nearest pub is more likely to offer Guinness than Gin & tonic!

Still under close reefed schooner and reduced foresails we’re now on a direct course to Faial as Rasmus had mercy on us and changed the wind to a near gale SW’ly and moderately high waves. Grateful, tks!

All is well on board.

Looks very much as if Rasmus wants to grant us an additional day in Horta. Wind SSW 7 touching at 8 at times. We even had to reduce the schooner to third reef and douse the outer jib! At the current speed Tuesday looks possible, but lets wait until we get closer to the center of the high pressure which is hovering over the Azores and may still bring us variable winds on the final approach.

After all this crew of trainees and volunteers has distinguished themselves over the last few weeks on a sailing voyage far above the ordinary with strong gales and storms and all the rough weather the North Atlantic can throw at you in winter in these latitudes. Never a cross word, never a sour look. Always cheerful and ready to take on any challenge, no matter how cold, wet, windy or inconvenient. In the middle of their free watch, during meals or in the middle of the darkest night. With Hedi, Nico and Thade joining in Horta there can hardly be a better prepared ship for the last leg from Horta to Bremen via Brixham where the first sailed coffee of the season will be discharged.