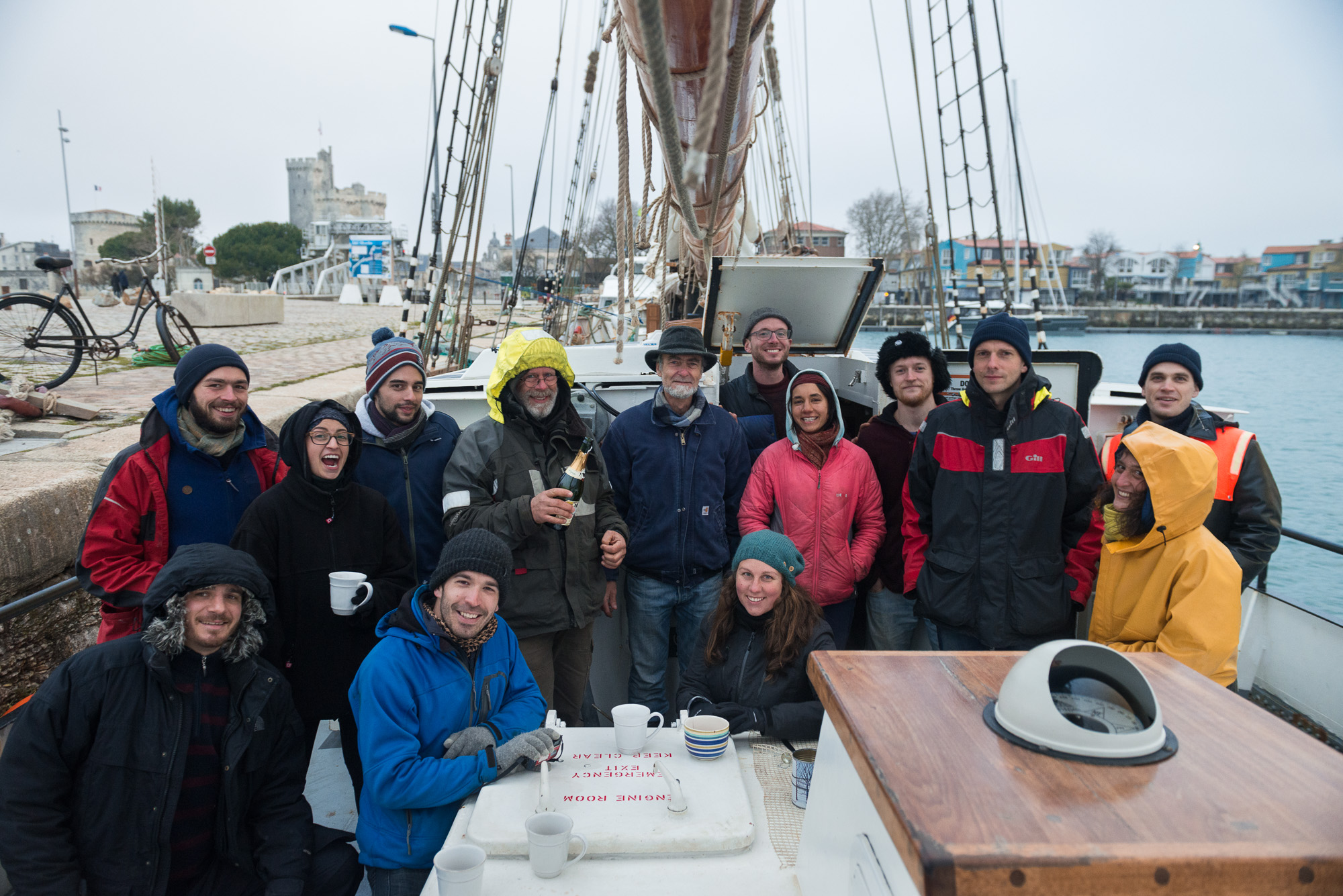 Good day dear all, and a very happy new year!

It’s about time for another update, sorry for my late. Arriving in La Rochelle on the 25th of December meant for all of us to let our hair down. And that we did quite happily, all of us, no one required a special invitation. Especially since we were not so sure we would make it before the strong winds start.

Remember? The enormous High in the Bay of Biscay had us come close to the English Channel before we could turn toward La Rochelle. Then the warnings would pile up: at first, it was supposed to be only a force 9 to hit around lunchtime the 25th, shortly after it was a 10, corrected not much later to an 11. My apologies to all the sail lovers and purists; I had no intention to put my crew through a force 11 in the Bay of Biscay and neither wanted to take a ride on a lee shore in short and stubby waves. So I made use of the main engine and supported the sails as best as we could and just so made it for the morning tide, only moments before the locks would close. However, I am going ahead of myself. We started the second leg of the crossing in Horta, didn’t we?

Two and a half days on Horta are just too short, I think I said that already, but were ready to give it a go at arriving before Chistmas. After a slow start the backstay breeze just did not want to end. A few days of around 8 knots are quite a blast for the Avontuur. And yes, one also gets used to that and it wears off. Hard to believe, but it does. ETA calculations go wild then, as usual, but hey, we are on a sailing ship and things change, right? In fact, the only constant we can be sure of is change! And so it did. Right on time actually.

Mircea comes that morning to me to show me an egg-sized lump under his right arm. It grew that fast over night! Must be a Cyst, so I think, and if I don’t want to puncture it myself the only option left is to fill Mircea to the rim with Antibiotics.  Starting with the Antibiotics I consult with TMAS Cuxhaven and the owner. “Get him off the ship” is the verdict “he needs to be operated asap”. All right, four days minimum for us to the nearest port, maybe five, and that’s including the engine. So a Pan Pan message goes out to get a hold of a faster ship out there to take him along. The MV “Guayaquil Express” is the closest and offers their help. While they steam toward “Avontuur” we get the tender ready and pack the most necessary things for Mircea. I think I’ll never forget that face. The pure sadness about having to leave his family at sea hits me hard. And that only a few days after being promoted to Bosun. He nods and decides to wear it with composure. The good byes are silent. Everybody is up for a hug.

While having little to no wind the sea is not calm, not by any measure. Bringing out the tender is still quite a task. Out of the fog the huge Hapag Lloyd container ship appears close by, time to get going. We can hardly make out the tiny tender against this giant of a ship. Their captain though keeps me updated all the way through about what happens alongside the lee of their ship. Soon enough our tender is back and the “Guayaquil Express” disappears in the fog again. It all happens so fast, efficient, and without a hint of a doubt that this is the best way forward. Yet, for us on board things become a bit quiet for a while. We all miss Mircea.

The weather window could not have been more perfect for this transfer, and so very shortly after we get underway again. And now that the crew becomes smaller once again the realization of the near end of the trip sets in. For some of the shipmates it is over two months now. Long enough to feel it could go on forever like this.

Christmas at sea, well, not my thing really. Moral easily suffers; hence, I propose to open up the celebrations for the returning light, from the 21st until arrival. Well received this is what we do. As expected the food is not only great, it is scrumptious, and so is the mood! Arriving the 25th instead of the 23rd makes no difference for us as a group that has sailed the Winter Nord-Atlantic. After all of this together we know now that the moment is all there really is, and we take it as it comes.

P.S.: Mircea has visited us in la Rochelle and is well. All went as planned and he was well taken care of all along. We look forward to having him return to the “Avontuur” after full recovery, which is likely to be in Guadeloupe.