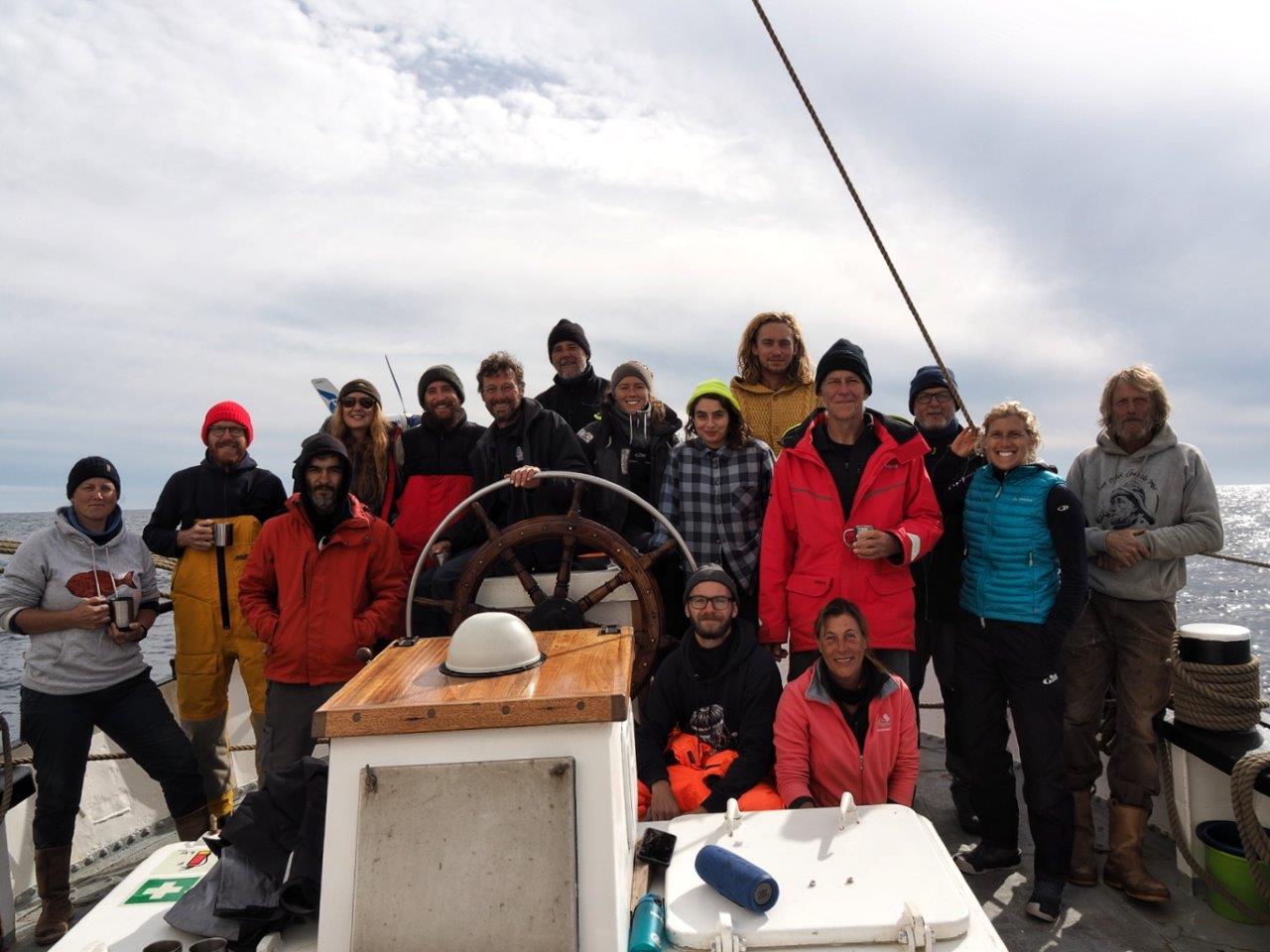 Veracruz – Halifax in 3 weeks according to plan. This seems only possible in with good luck.  We provision for 6 weeks… so the different opinions shortly before the departure from Mexico provides for some tension.

The first sea days in the Gulf of Mexico with little wind are quiet, as already on the outward voyage the humidity is over 90% so we start with the extraction of sea salt from our clothes. 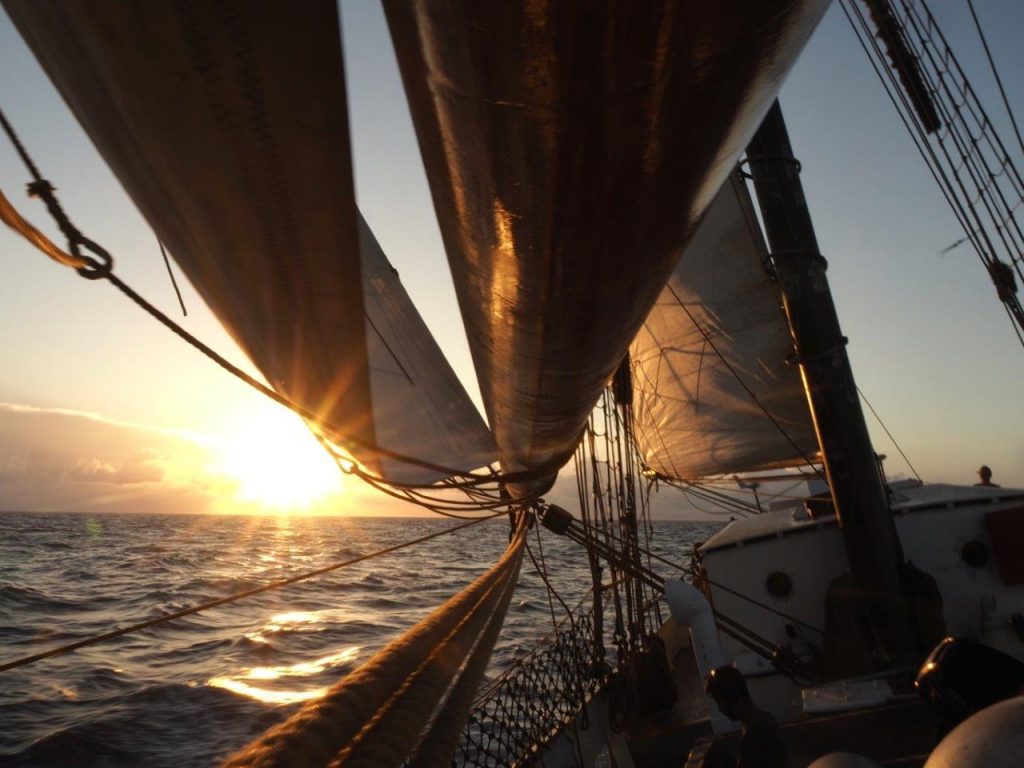 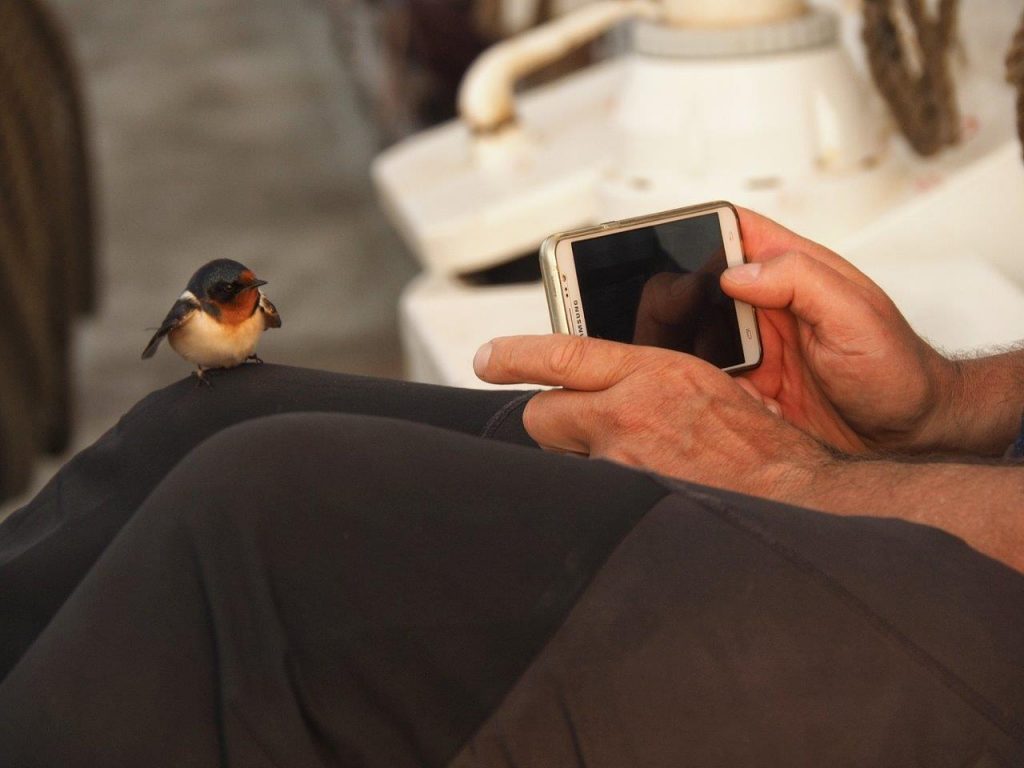 The calm is soon replaced by proper wind, waves, and seasickness for some newcomers. In addition, the ship’s inclined position for days on end, walking, standing, sleeping, cooking, even sitting while eating in the galley are simply exhausting for everyone.

But at least it goes fast, the trip from the Gulf of Mexico seems quick. And then comes Easter Sunday. In which simply nothing works. Calm weather, wind from the wrong direction, the wrong current, turn after turn and day after day pass by without any real progress being possible. The warm and sunny days on the ship are used for deck work and recreation. 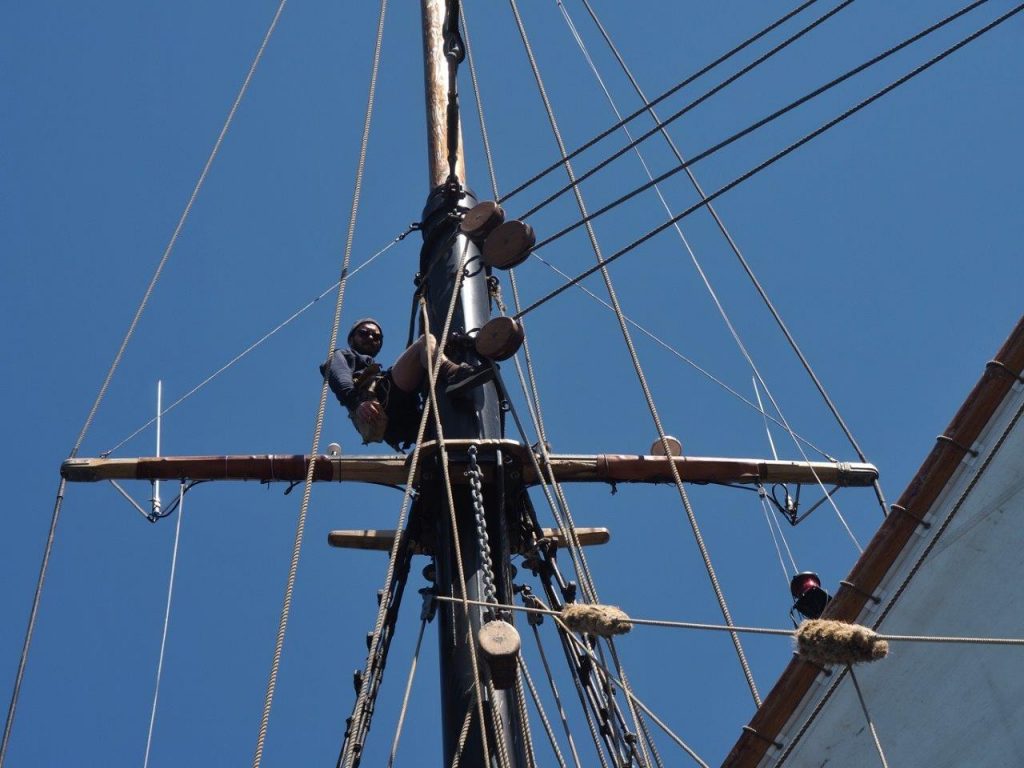 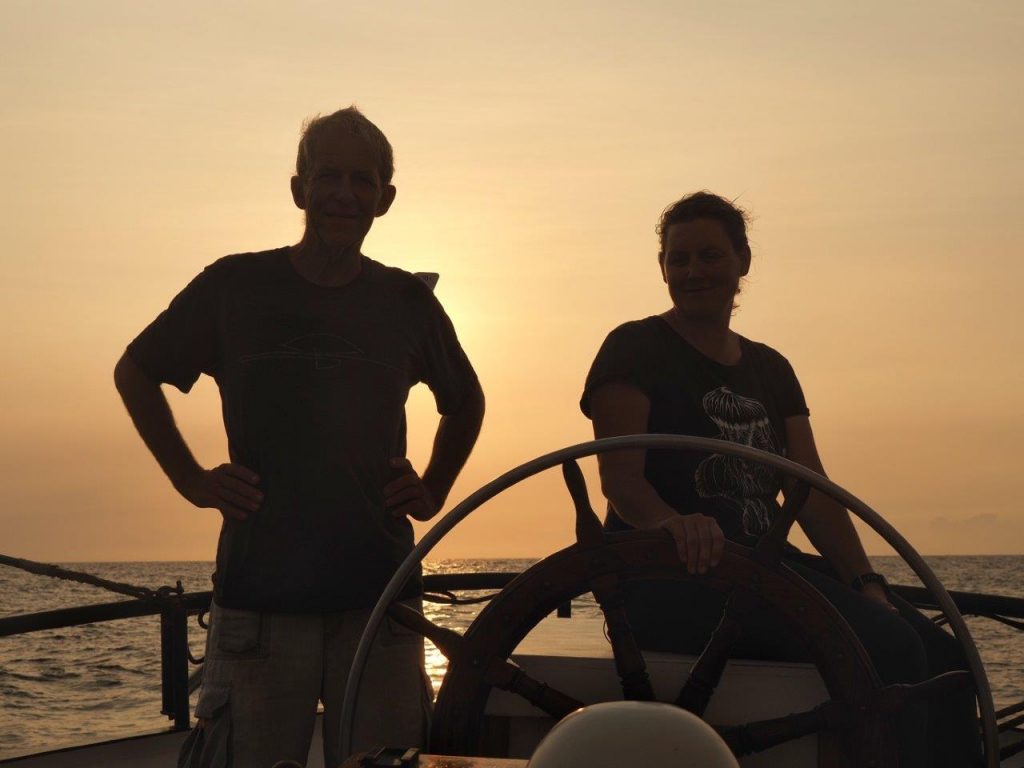 There will again be a Sunday Captain’s reception and  in the afternoon we have workshops from astronavigation to the details of Teikei Coffee. Then finally the trip through the Strait of Florida with the Gulf Stream.  As compensation for the last tough weeks it goes with another speed record over 24 hours, 233 nautical miles, an average speed of 9.7 knots to the North! 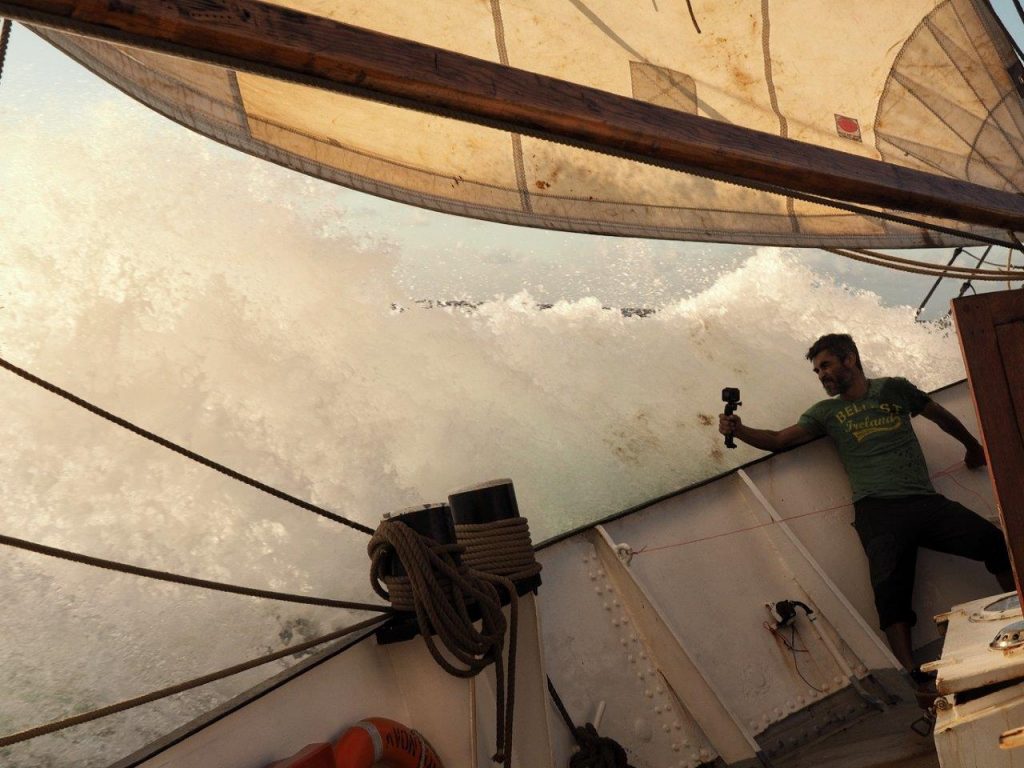 We are racing with a good wave past the distant skyline of Miami and Palm Beach, watched from the air by helicopters and a friendly military jet. At the beginning of May, we wanted to experience a nocturnal rocket launch by the ISS which happen to be planned.  This was to be off the coast of Cape Canaveral but unfortunately the American rocket researchers don’t cope as well with the wind as we do, the launch is postponed.

After a good two weeks we still haven’t experienced all the weather. It gets noticeably cooler. Heavy rain showers leave only the guard on deck, the rest of the crew is moving below deck. 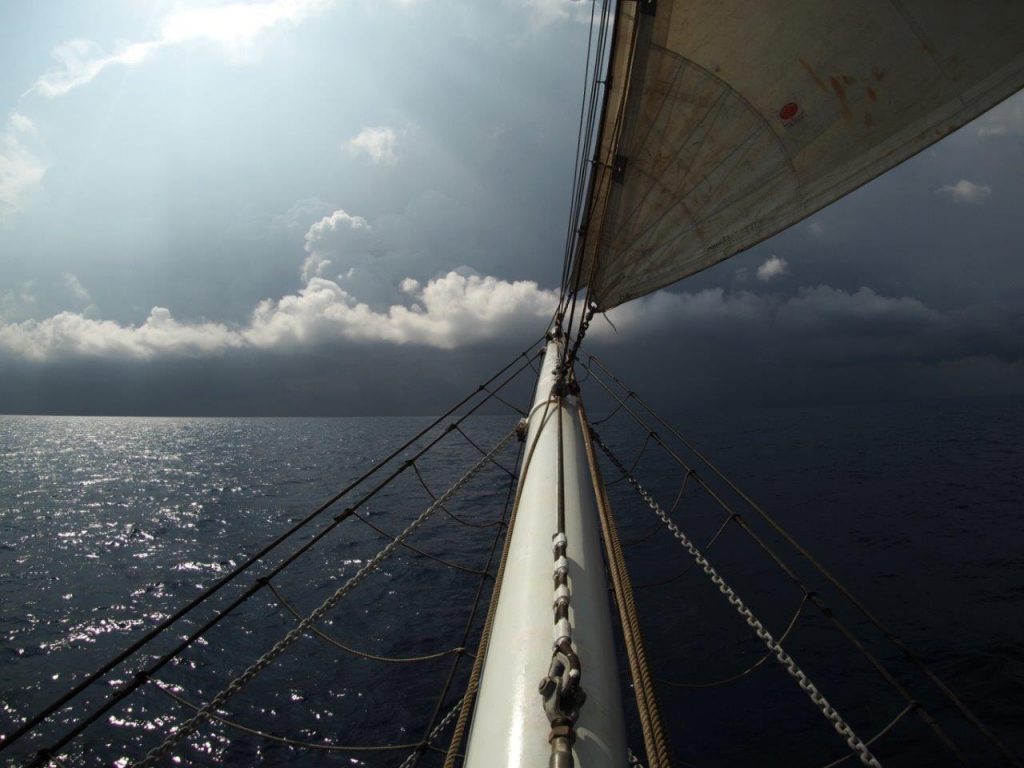 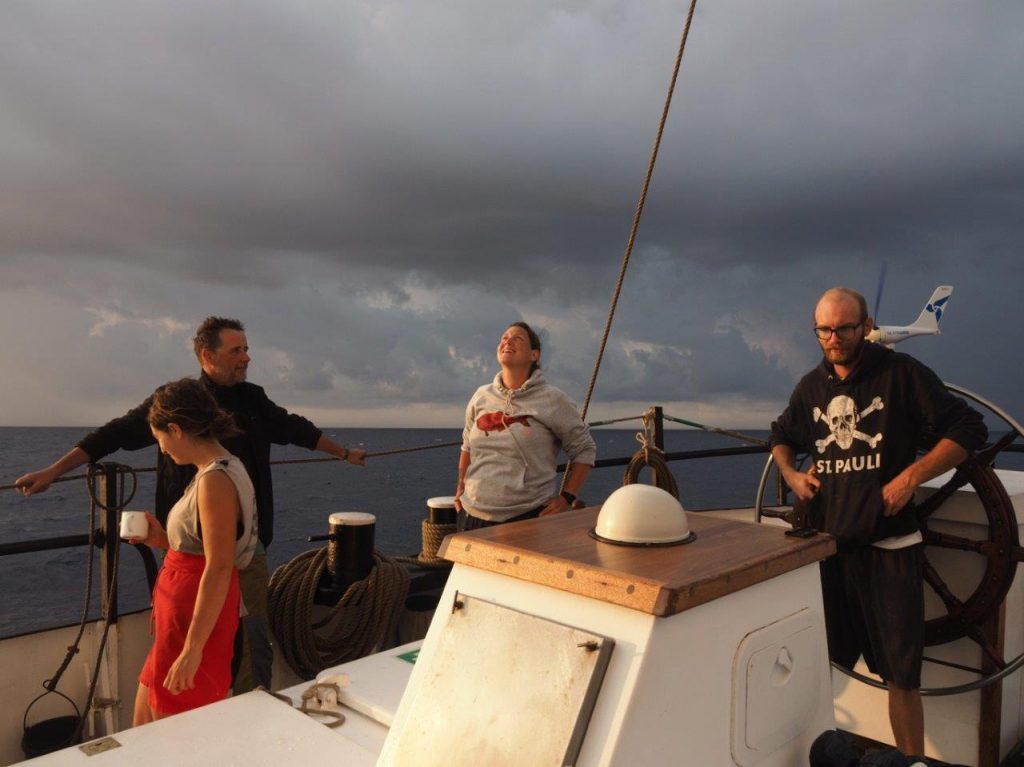 While the water temperature in the Gulf Stream was 25 degrees for a long time, it is now dropping from one day to the next to 15 degrees. In the morning, at noon, at night, you can rely on standing on the lee side up to your knees, sometimes higher in the cold water on deck during manoeuvres. On the way to the bunk or at the beginning of the wake on the way to the stern – complete spray shower from above. Old rubber boots left on board are suddenly in great demand, even if they’re going to fill up from above anyway. From now on, it’s a matter of taking your clothes and shoes, which are already wet and no longer dry for days, skilfully to their next use and at least keeping something dry in your locker. 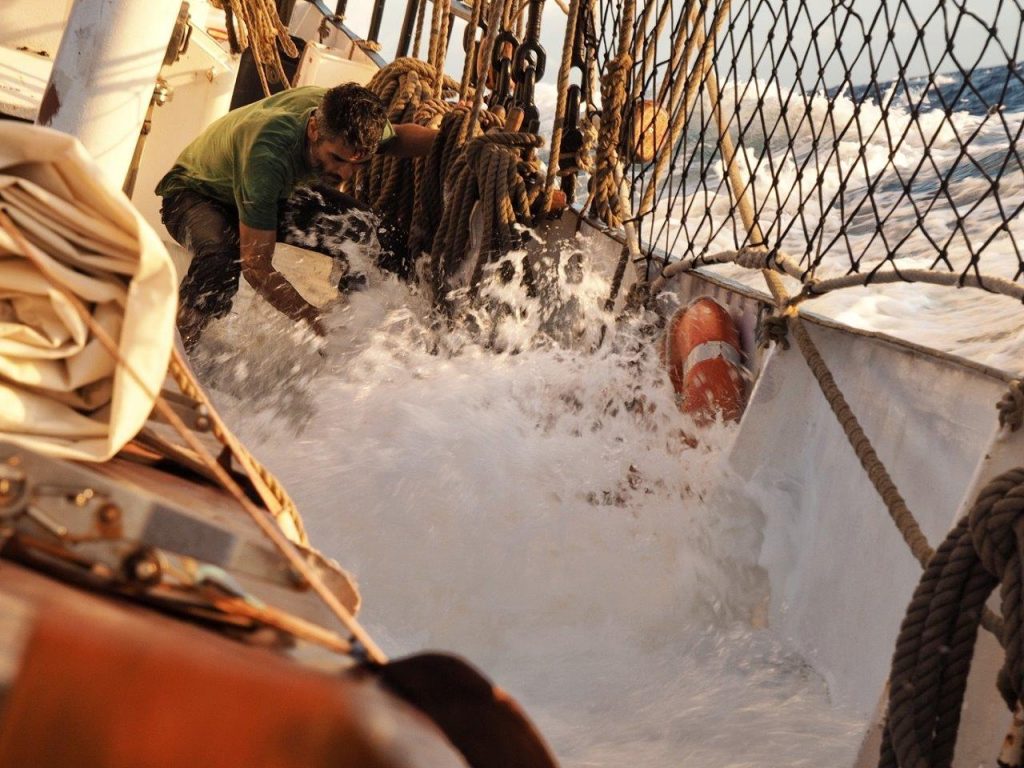 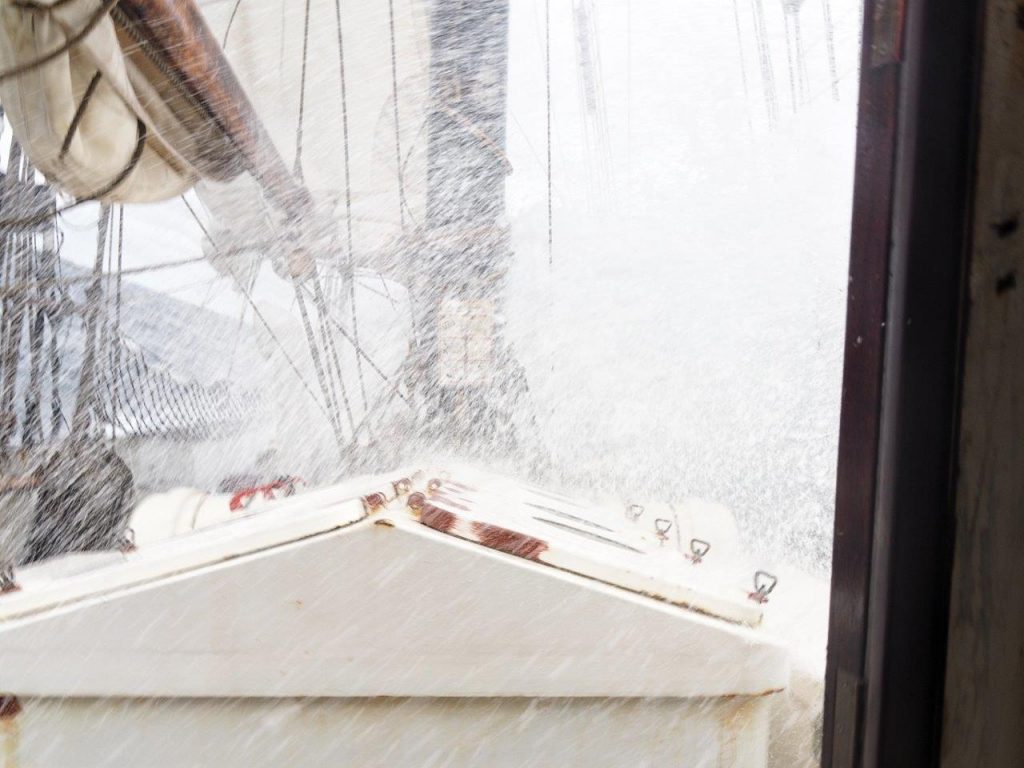 And then there’s the storm. Nightly, violent, with distant flashes and a lot of wind, wave and rain. The 0-4 guard stands suddenly in glistening light and sees for a short time nothing, as a lightning strikes in direct proximity perhaps even in the mast. Nobody sleeps below deck either. Everything goes well, but we don’t have to have it again. But the next day we continue with wind force 8 and four to five meter high waves. On the next day, the weather calmed down but the sails were damaged. Some things can be repaired with days of patching, others have to wait until Halifax. 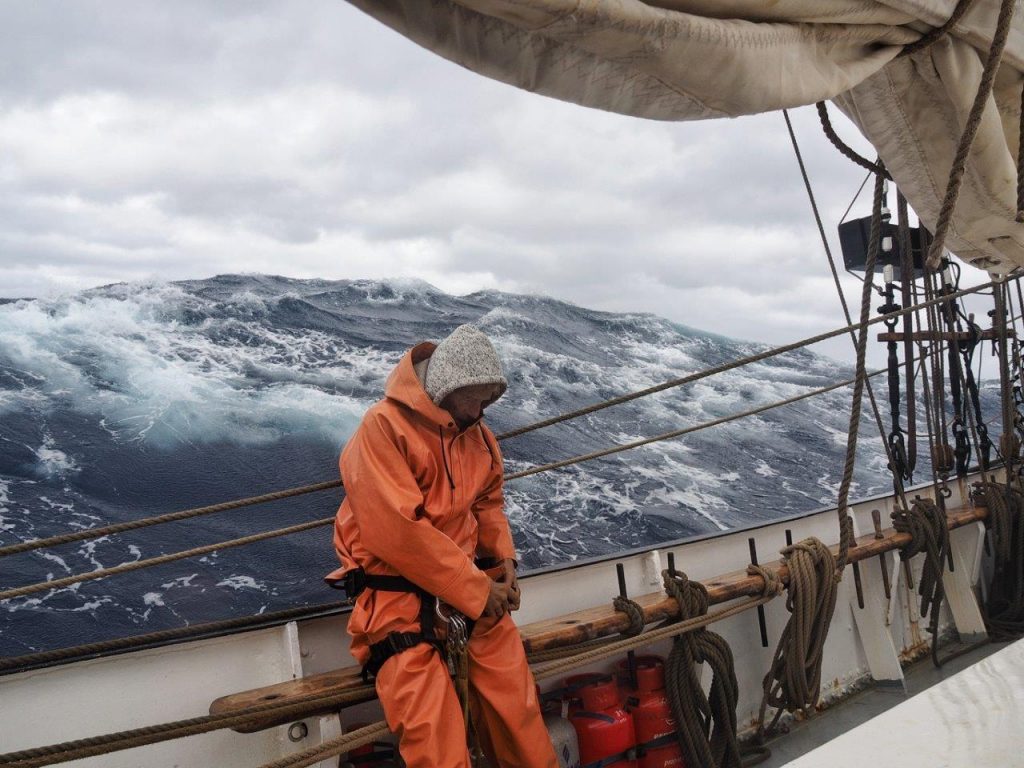 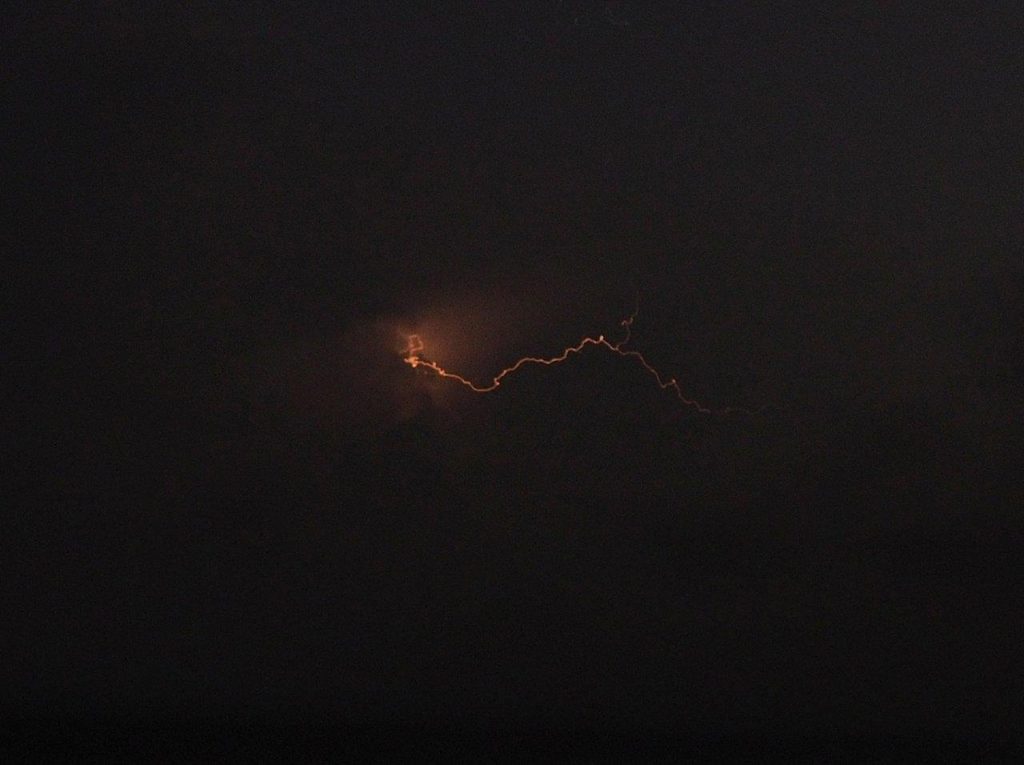 At 3:30 in the morning, “Wake up call – put on everything you’ve got!”. The outside temperature and the temperature on board are no longer different. The daily adjustment of the worn clothing layers takes place, on top seven, below four… Only Niki is still waiting with the use of his long underpants for really cold days. 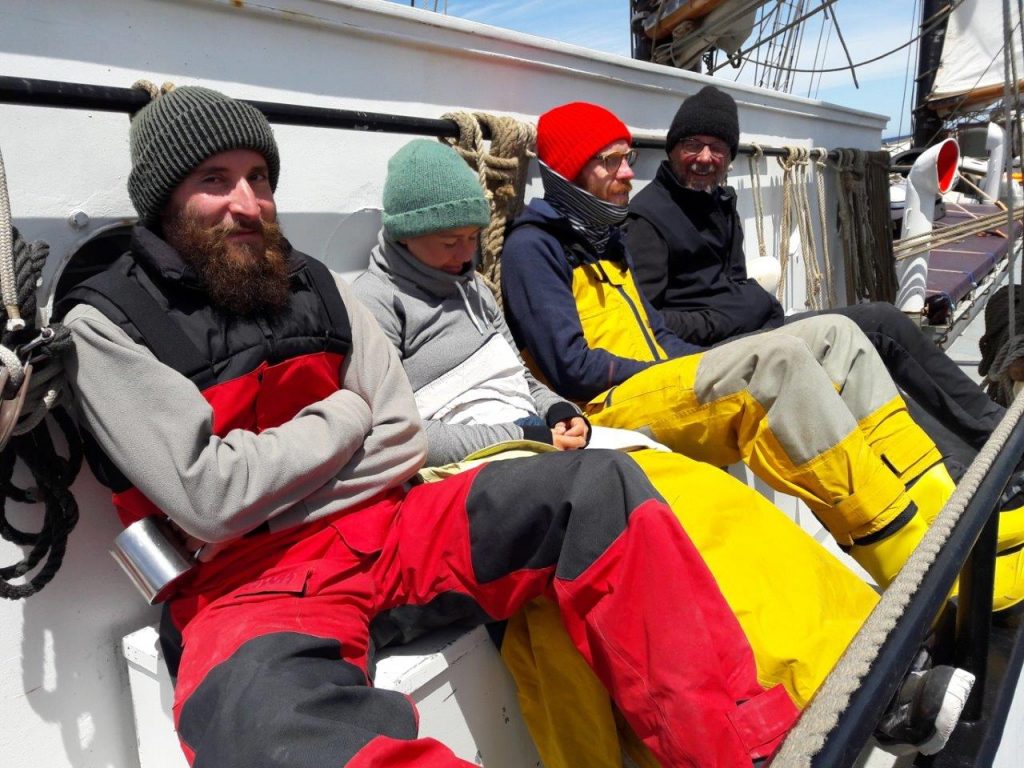 So shortly before Halifax, life on board becomes more and more intense, with a hot shower and freshly washed laundry not far away now. We are excited for the arrival! 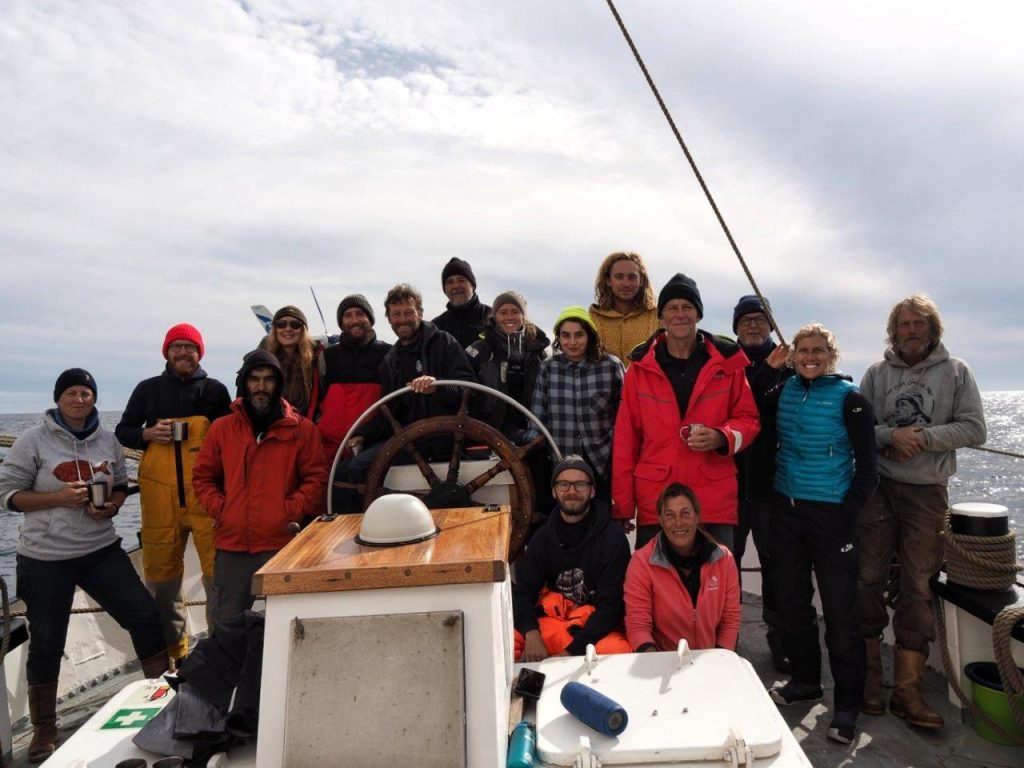 Then finally after a few days and nights with a speed of only one knot and afterwards strong wind and wave not far from Halifax we finally reach our destination on 14.5.2019 dripping wet and after a good four weeks. We enjoy the first-class service from Shelby at Just us Coffee and the seafaring mission with hot showers and a whirlpool at the WESTIN Hotel.

Text and photos by Antje

You can support our crew, the ship, and our project by buying premium direct trade AVONTUUR Products from our ONLINE SHOP.

Follow Voyage 4 in real time on our Shiptracker sponsored by Herberg Systems or on Instagram/Facebook.