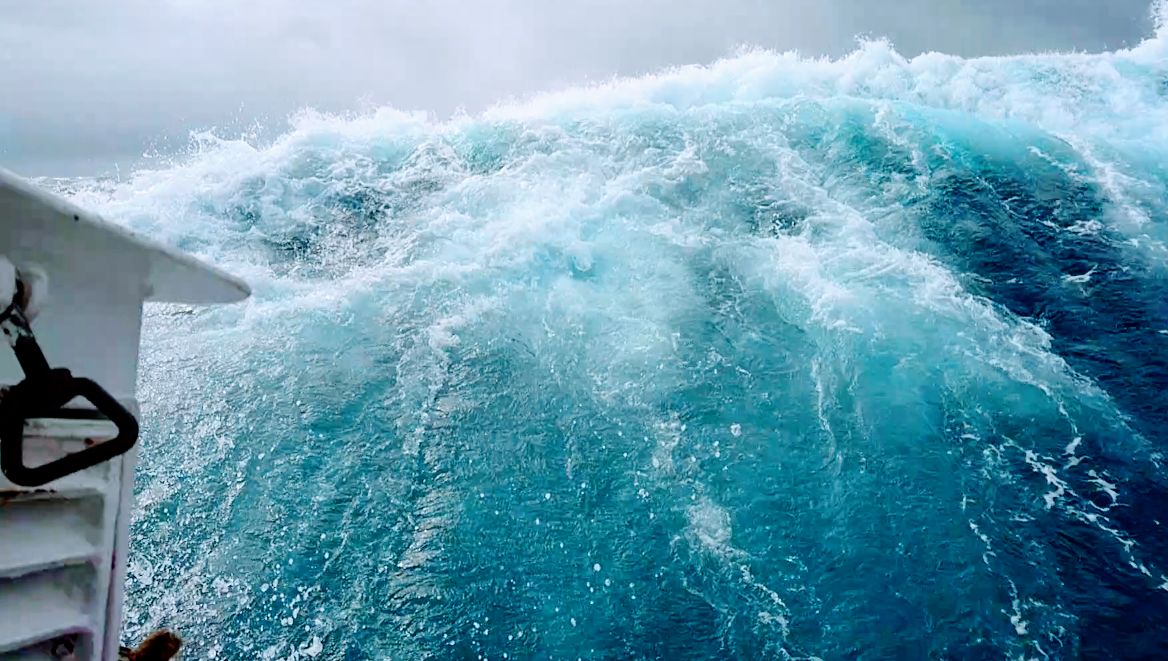 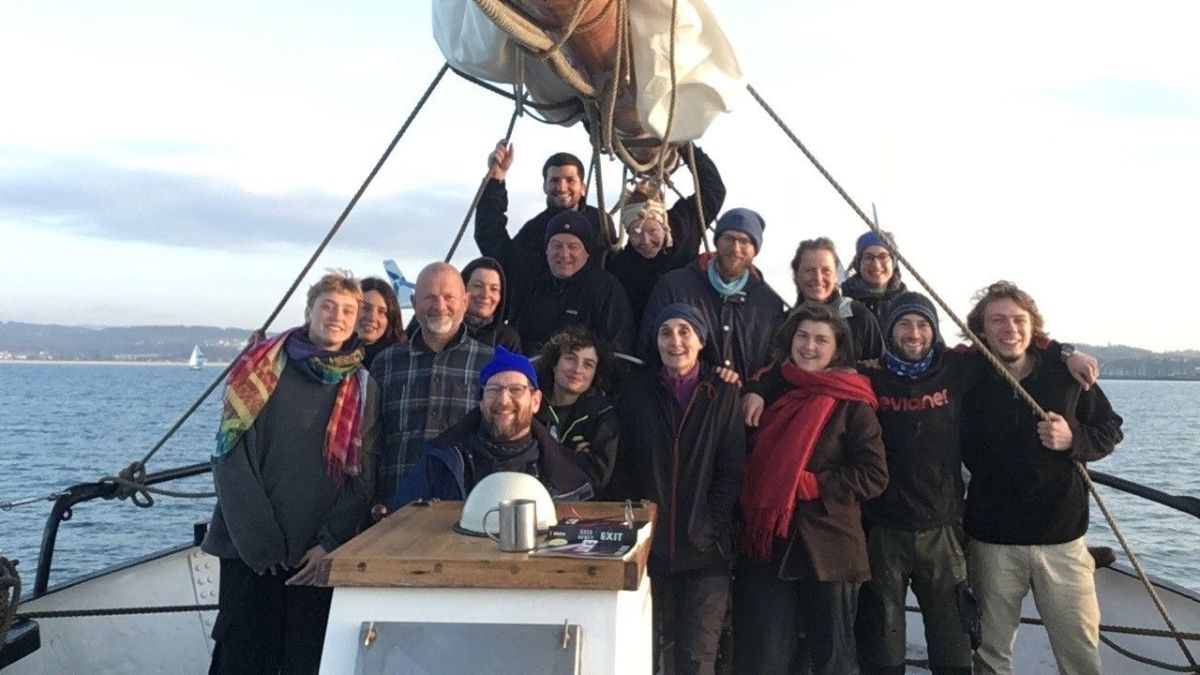 On 8th February we set sail: after just about three days in the port of Bordeaux and the unloading of our goods transported on Voyage 8, the AVONTUUR set sail on what is now our ninth cargo sailing voyage with fresh supplies and a new crew. Our “Classic Route” will take us via the Canary Islands to the Caribbean, where we will take new rum on board for us. Subsequent port stops are planned in Costa Rica, Belize and Mexico to load coffee and cocoa for our cooperation partners. 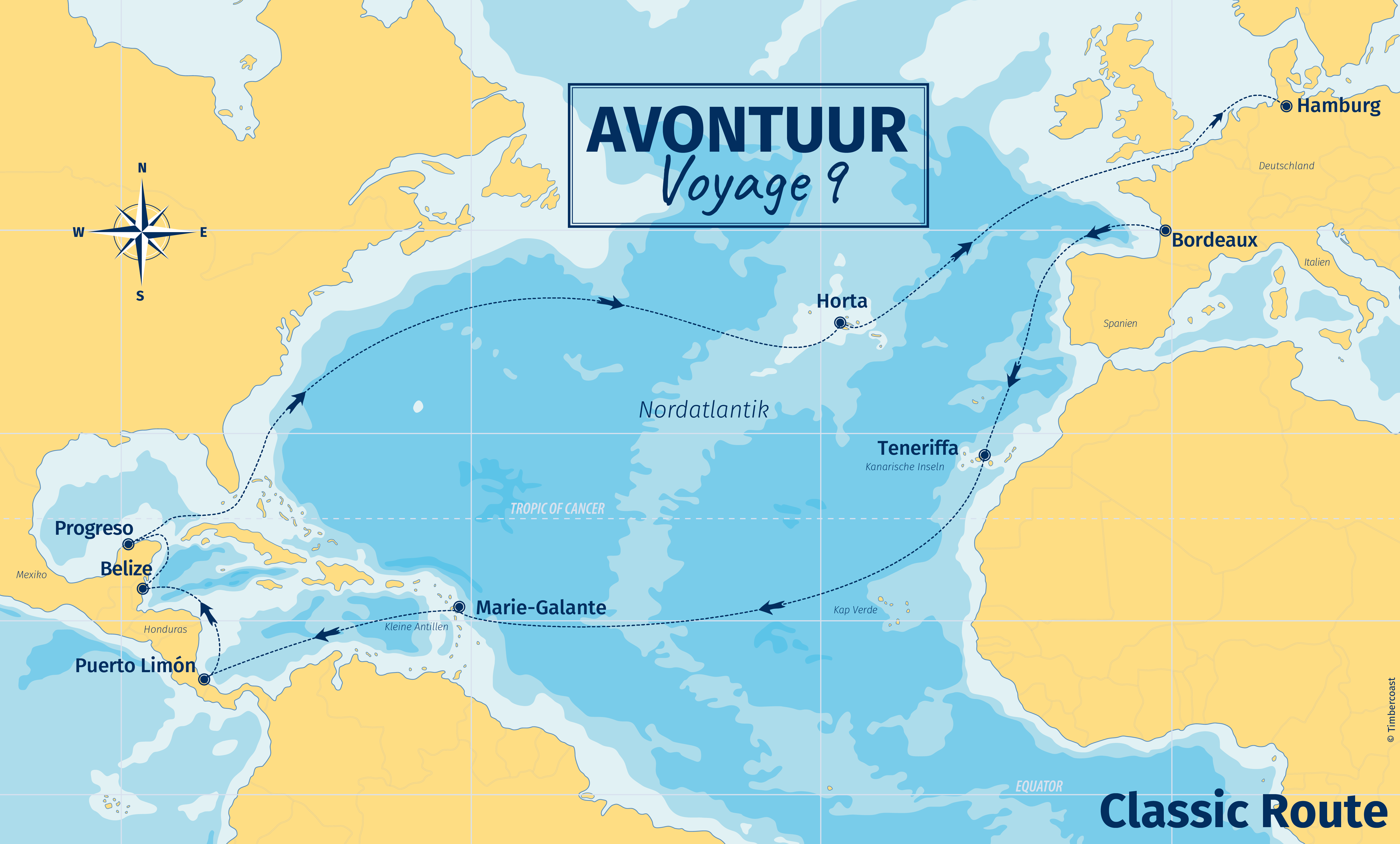 From Progreso we will then start our way back across the North Atlantic again and, after a short stopover in the Azores, should reach our destination port of Hamburg by the end of June.

On our first leg, however, things got a bit wild: after only 4 days at sea, we had to drop anchor in the Ría de Betanzos on the north coast of Spain, because a low-pressure area from the Atlantic is currently blowing a strong headwind across our bow. There is only one thing left to do: wait and see.

But our crew is taking it easy and making the best of it, as you can see. If the wind forecasts remain reasonably reliable, we should be able to weigh anchor on Thursday and leave Galicia behind on a north-westerly course. From Friday onwards, our ship can expect near gale to gale force winds from a northerly direction. Ideal for passing Spain’s westernmost peninsula, Cape Finisterre, far to port with the flowing sheets and heading south downwind to reach Tenerife, probably on 24th February.

On a sailing ship, the clocks sometimes run differently and our plans have to be adjusted again and again. That is the natural order of things, and we go with it, not against it. 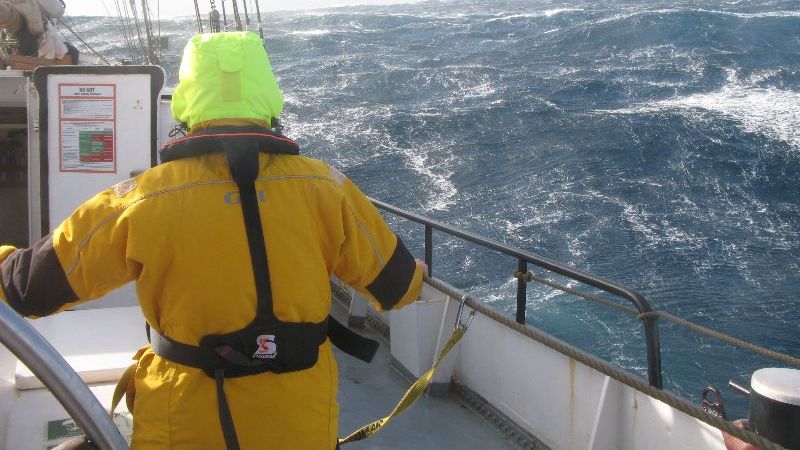 A professional position is available for our voyage aboard the cargo sailing vessel AVONTUUR. Become part of our team and support cargo under sail with your action! We are looking for a flexible & experienced

Officer in Charge of a Navigational Watch

for immediate employment – latest on 27.02.22 – on board our cargo sailing ship AVONTUUR

For your application you can reach us via the following
contact details:

This was our 8th cargo sailing voyage 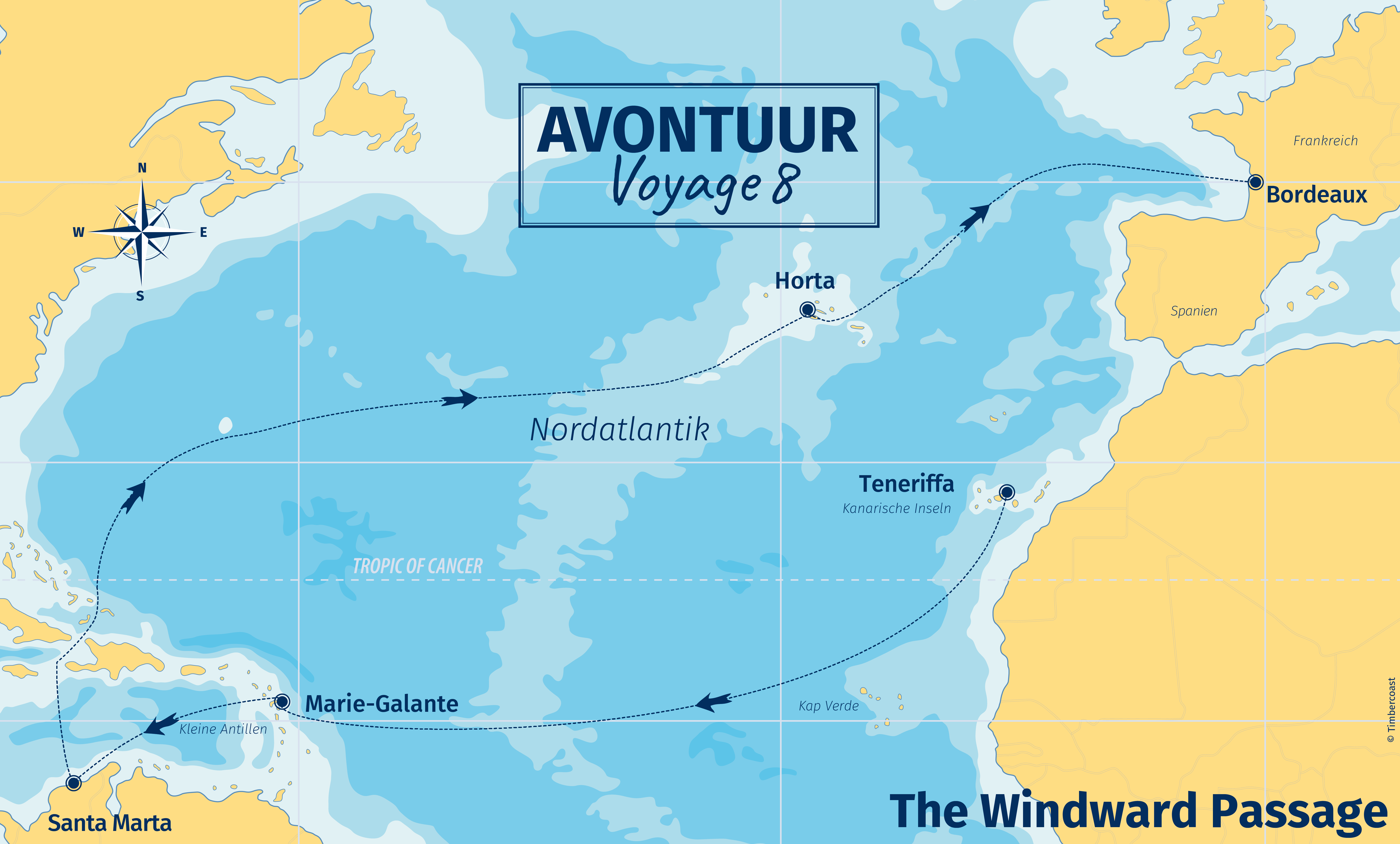 100 days, 77 of them at sea and 9,923 nautical miles took us from Tenerife to the French Antilles, to Colombia and via the Azores back across the Atlantic and the Bay of Biscay to Bordeaux in France. On board this time we had 45 tonnes of Colombian organic coffee and cocoa as well as 17 barrels of the finest Rhum Agricole. A total of 23 crew members from 7 different nations were on board the AVONTUUR on this MISSION ZERO.

“After a well deserved break in Horta (Faial, Azores) we set sail on a sunny Wednesday afternoon for the final leg to Bordeaux to deliver a cargo of organic and fair coffee, cacao and rum to our cargo partners Meo-Ficheaux Coffee, Bielle Rhum, Cacao de Corazón, Cacao Latitudes and TOWT. Due to an extensive high pressure area reaching from north Europe to the Azores AVONTUUR was forced to sail north to north north west for the first few days, before we could shape a more easterly course which made us almost touch the Irish coast. In an area where we had expected strong winter storms, ice and snow, this time the Ocean pampered us with moderate conditions throughout. At times we even had to scratch the masts to stir Rasmus awake to grant us more wind!

Under these conditions we more or less sailed along the perimeter of the high, avoiding getting to close to its center so that we reached latitude 48° N before we could shape a course directly to the entrance of the Gironde. Fun fact: ‘Grain de Sail’ one of the only three sail cargo ships plying the winterly waves of the north Atlantic sailed past on her way from New York to Brest on 30.01., our last Sunday at sea, before we reached Bordeaux late on Friday 04.02.22.

It was a great pleasure to sail with a weathered crew of seamen and women, all of whom had developed from landlubbers to sailors during almost 10000 miles between their first step on board and their disembarkation. Not only are all of them now able to hand, reef and steer, tie knots, repair sails and take care of the multitude of other tasks and daily chores on a cargo sailing ship. They have also crossed the Atlantic E to W purely under sail from dock to dock or anchorage, which is an achievement that few people on earth can boast of today. They have also crossed the Atlantic ocean from W to E in winter. A challenging task, that was unusual even during the heydays of cargo sailing and has rarely been heard of since. A feat rarely accomplished nowadays, a feat that each one of the crew can be proud of for the rest of their lives! 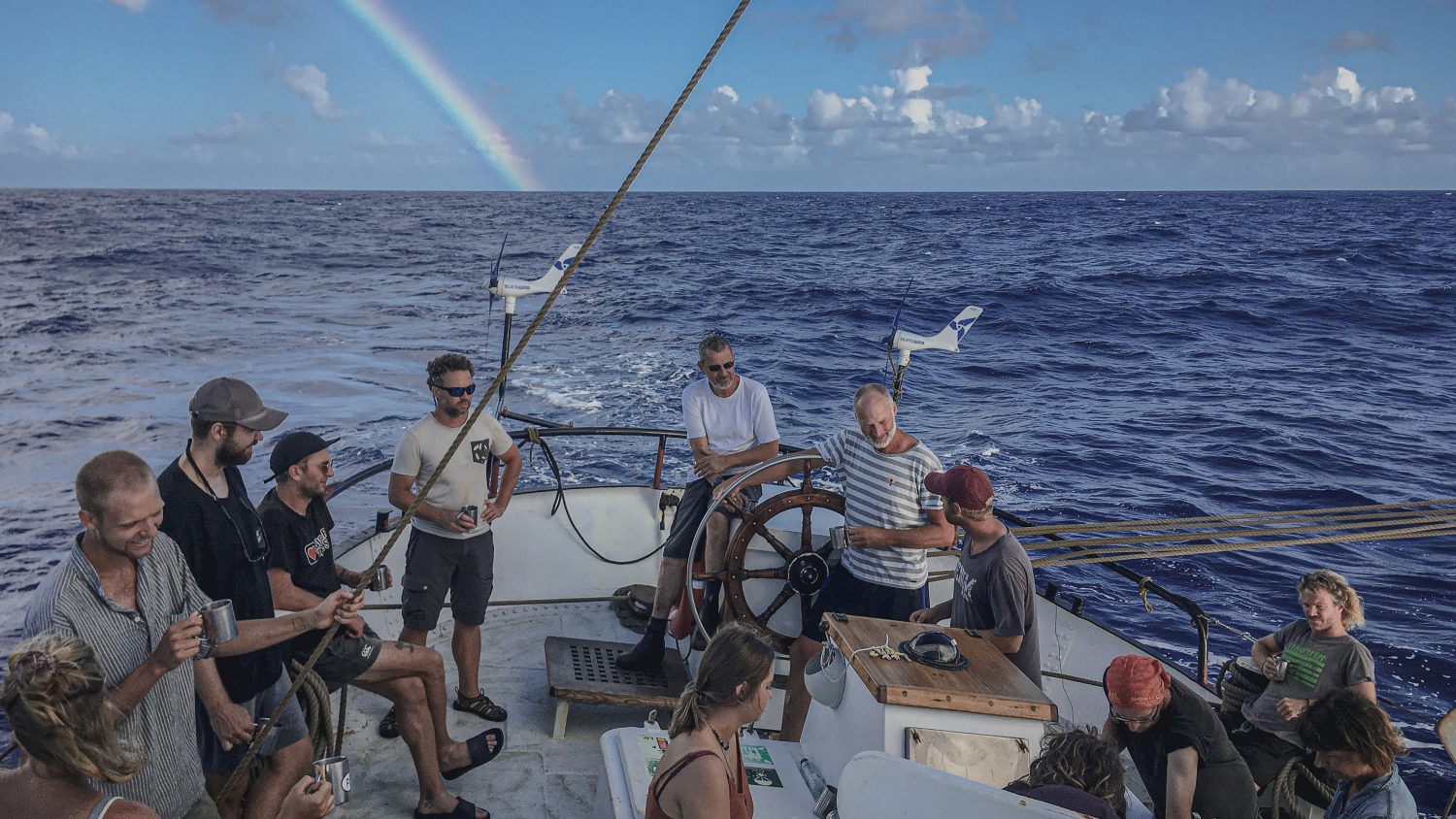 It is always sad to see a crew leave the ship that has grown together like a well tuned orchestra or close knit family able to handle the AVONTUUR under any condition Rasmus would throw at them. Alas, nobody can sail forever and no sooner that the old crew had disembarked, the new crew came on board, excited, full of expectations and ready to start learning everything it takes to sail AVONTUUR safely.

After the cargo was discharged Captain Jens, his officers Frida and Dan, our bosun Xtiane as well as deckhand Eva wasted no time to start preparing AVONTUUR and her new crew to sail into the famous and notorious Bay of Biscay. On Tuesday 8th February they cast off from Bassens under sail and are now on their first leg of voyage 9, which will take them to their first stop in Santa Cruz de Tenerife on/around 23rd of February and on to the Caribbean Sea and Central America. We are expecting them back in Hamburg in late June with AVONTUUR’s hold filled to the top of her coamings with organic coffee, cacao and other fairly traded delicacies. I wish the crew a safe journey, fair winds and following seas!”

The Grand Crew gets a little brother 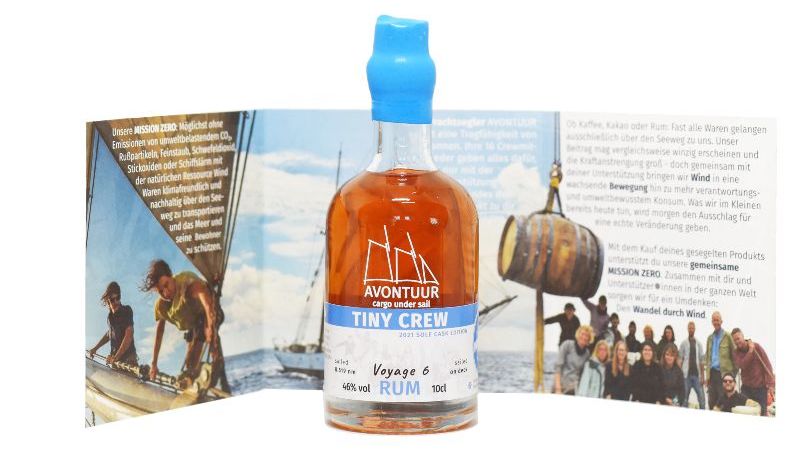 Our rum bottling of Voyage 6, the Grand Crew 2021 Sole Cask Edition, now comes in a separate, strictly limited and handcrafted special edition for tasting. The “TINY CREW” is in no way inferior to its big brother and with its 100ml corresponds to a “Double Dinghy”. Only 97 bottles were hand-filled, labelled and sealed with a natural stopper and wax.

The special bottling for the launch of our Voyage 9 is available exclusively in our home port at Steendiek or online at www.timbercoast.de.

Impressions from casting off in Bordeaux

Whenever our AVONTUUR leaves a port behind, we look after her with one smiling eye and one weeping eye. See for yourself…

Pictures in this Newsletter were created by Dagmar Riedmüller (5) | Christoph Bogner (7) | Timbercoast (1-4; 6; 8-9).
Picture 4 is taken from winderfinder.com