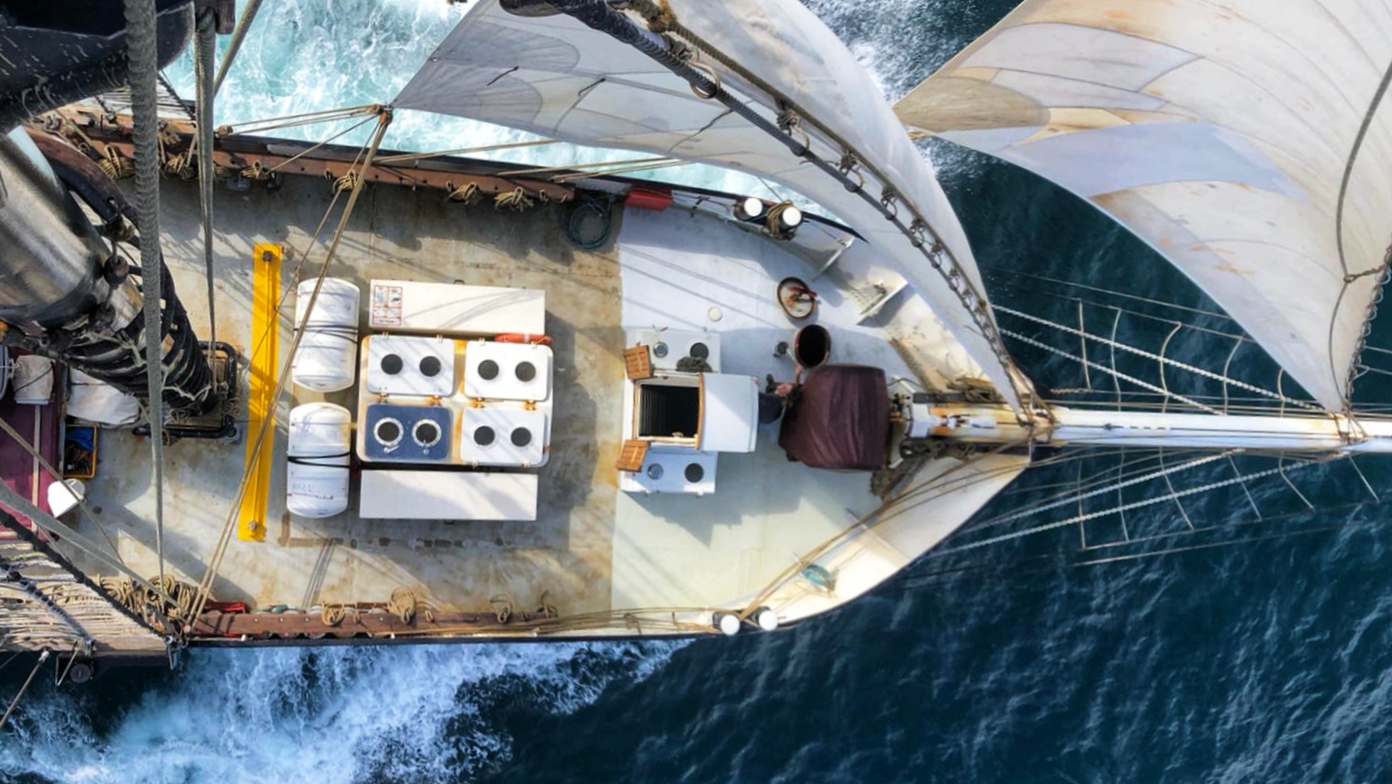 On the 9th of September 2022, we cast off at 11 am local time in Harburg’s Binnenhafen to set sail on our 10th cargo sailing voyage. 15 crew members from France, Austria, Switzerland, Mexico and Germany set off on their adventure for clean sea transport. We have put together a few animated pictures of the start of our voyage in Hamburg for you here:

We postponed our original departure date on 6 September in connection with the symposium “Peking 2.0” of the Hamburg Historical Museums Foundation, as the symposium could not take place at short notice (there is supposed to be a follow-up date, but it is not know yet) and there was no hurry for us, because: in contrast to the past two years, the wind was extremely favourable this time, so that after only a short calm at the beginning of the voyage, we were able to reach the first destination port Douarnenez in the Bretagne on schedule and pass the English Channel without delay. It was a pity, however, that the planned short stopover on Föhr had to be cancelled. We had a great idea for some exceptional cargo there, but transporting goods by sailing ship is first and foremost a lot of paperwork, and in the end we simply didn’t have the necessary time. We’ll keep on working on it!

This time, however, we definitely have some exceptional cargo on board on our Voyage 10: Some people were quite astonished at the pier of the Harburg Binnenhafen when a crane harness lifted a Tesla Roadster into the hold of our AVONTUUR on Tuesday before we set sail! Transporting a car in a clean way by sea seems quite absurd at first glance. Behind it, however, stands the exciting idea of Rafael de Mestre to demonstrate the possibilities of fossil-free mobility with his Tesla Roadster from 2011 by taking it to the extreme: “Around the world electrically in 80 days” – with this goal, the native Spanish started a year later on his first clean round-the-world trip, for which he needed 127 days in the end. In a second attempt four years later, he achieved the 80 days, but one problem remained: the unavoidable legs by sea for the round-the-world trip could not be managed in a clean way and the pollutants emitted could only be compensated. But Rafael’s pioneering spirit was unbroken, and so contact with Cornelius followed shortly afterwards. With the AVONTUUR, we are now sailing Rafael’s Tesla to Miami, where it will be equipped with a new and more efficient battery.

“This transport makes history, it is the first transport of an electric car across the Atlantic Ocean – to my knowledge, no car has even crossed the ocean emission-free before.”  – Rafael de Mestre

Starting in Miami, the car will then embark on an “80edays 2024” promotional tour in the US with the goal of circumnavigating the world completely zero emissions in 2024. 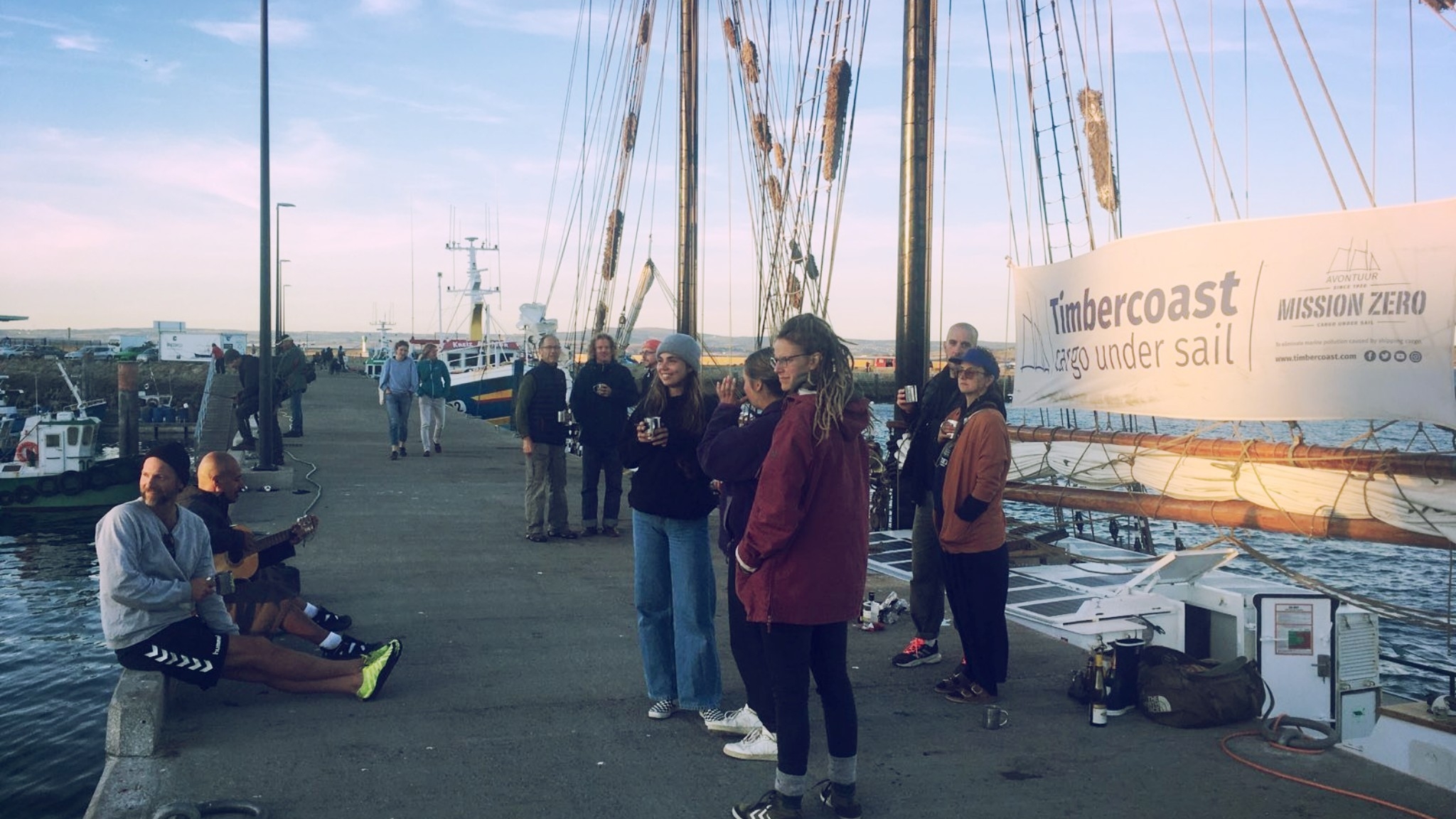 But back to France: After the crew of the AVONTUUR was able to spend the weekend in the picturesque fishing village of Douarnenez, we set off again on Monday at 12 noon local time on our next leg across the Bay of Biscay towards the Canary Islands. On board, then, a Tesla Roadster and ex-red wine barrels that are to be filled with Rhum Agricole in the Caribbean. We currently expect the AVONTUUR to take another 10 days to make her way south and expect her and her crew to arrive in Tenerife at the beginning of October.

On land, we are currently working on the new sailed products from our last Voyage 9. Among other goods on board were cocoa beans from Belize, which we want to process into new chocolates together with our bean-to-bar specialist Choco Del Sol as soon as possible. In addition to the delightful creations, this also requires the right packaging, which is currently in the making. You can already look forward to three handmade varieties from our Voyage 9.

And of course we also had some rum on board. Here, the bottling will take a little longer, as our bottles also have to be produced completely new (we simply didn’t have any more) and we still have to try out the suitable drinking strengths (a really hard job, but someone has to do it! 😉 ). If you don’t want to wait that long, you can still find fine sailed spirits from the last two years in our online shop.

Or just come and visit us in Flensburg at the weekend: There, at the first International Sailors Affairs from 23-25 September, we will be armed with glasses and bottles of our latest bottlings in the Flens Arena, where we will present ourselves and our sailed goods, taste them and look forward to a good time among friends.

You can find more information about INSA Flensburg here: https://www.insa-boatshow.de 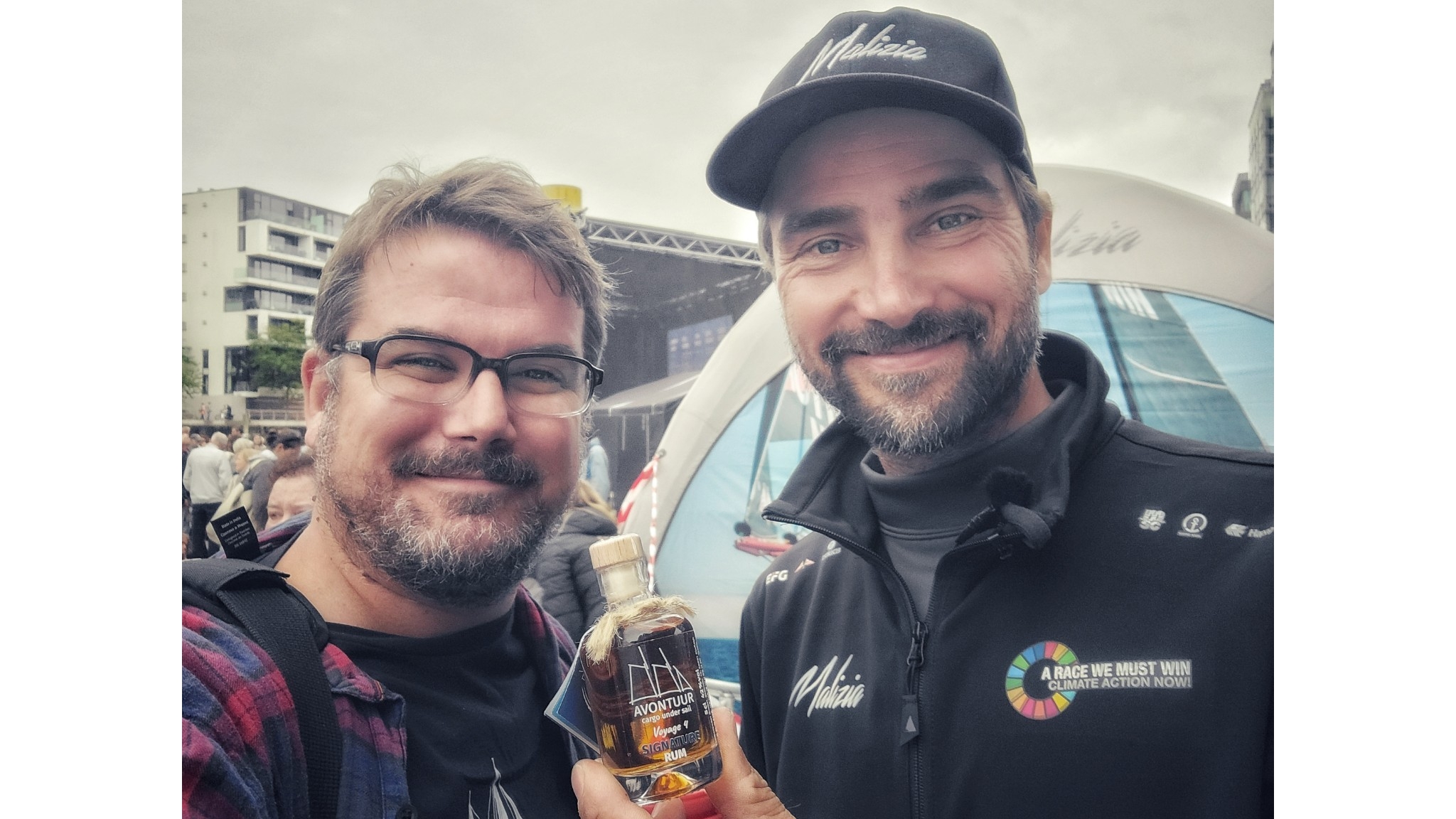 And besides everything that has happened in the past few days and will happen in the following days, we had a small highlight to report on the 6th of September, our original departure date: At Sandtorkai in Hamburg, we were able to briefly meet Boris Herrmann and his Malizia team with their newly christened “Malizia-Seaexplorer”. Boris had taken our sailed rum on board on his Vendée Globe 2020/2021, and he had kept it in good memory. Of course we had to refill the sailed rum (and yes, it really was our last “dinghy”, we’re working on new supplies there too, I promise!) before the AVONTUUR itself set off again.

“Climate Action Now! – A Race We Must Win” could also be written on our sails. For TIMBERCOAST has been actively sailing for six years now for a necessary re-thinking in conventional maritime shipping together with cargo sailing initiatives all over the world. We wish Boris Herrmann and Team Malizia fair winds and following seas! And when Boris Herrmann sets off in November with the Malizia Sea Explorer on the Route du Rhum to Guadeloupe, we will probably already be there. Cheers!

Pictures in this Newsletter were created by Alice von Hintzenstern (2) | Lara Kirn (3) | Timbercoast (1;5).